Olivia was 9-years-old, caught a stomach bug, then stopped eating and walking. The hospital ordered psychotherapy for 35 hours a week and said her parents could not be involved. The parents said no, so the hospital threatened to call CPS.

A stomach bug went through the Huffman* family and nearly everyone got sick. After a week, the rest of the family had gotten better, but nine-year-old Olivia* was still unable to keep down any solid food. 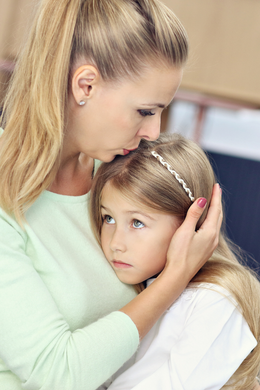 The hospital spent the next week trying to determine the cause of Olivia’s illness. When they were unable to do so, they transferred Olivia to another hospital in the system.

During the following week, the second hospital considered whether the cause of the illness could be psychological. After a few days, however, that was ruled out by the pediatric psychologist.

For the next few days, Olivia’s care was shuffled around from one physician to another, and each of them seemed to be contradicting one another. During this time, Olivia lost the ability to walk on her own. Seeing his daughter’s condition declining, Mr. Huffman shared his frustrations with the hospital about the inconsistent and conflicting care they were receiving. In response, the hospital called a meeting to coordinate Olivia’s care.

At the meeting, the hospital’s planned course of treatment shifted yet again. The pediatric psychologist had decided that Olivia’s symptoms were indeed psychological and that she needed intensive psychiatric care in the hospital. When Mr. and Mrs. Huffman pointed out that the only real trauma Olivia had ever known in her life was the last two weeks she had spent in the hospital, the psychologist said Olivia could do outpatient treatment.

“What would the outpatient treatment look like?” Mr. and Mrs. Huffman asked.

“You will need to bring Olivia into the hospital five days a week for seven hours a day.”

“Can I at least come with her?” Mrs. Huffman asked.

Mrs. Huffman then pointed out that Olivia had been homeschooled all of her life and was used to having her family and people she knew with her. “If this was all in her head, wouldn’t this just make everything worse?”

“We will help her cope with it,” the psychologist said.

The Huffmans left the meeting discouraged. The next day, Olivia was discharged and allowed to go home with a feeding tube and a wheelchair, but the Huffmans had strict instructions to bring her back in two days to begin the intensive psychiatric therapy.

The next day, the Huffmans picked up the phone, called Heritage Defense, and told attorney Bradley Pierce, “We will not take our daughter back to that hospital.” After discussing the situation, Pierce advised that the family contact their personal pediatrician as the next step.

When he heard what had happened, Dr. Gershowitz was appalled at the treatment Olivia had received at the hospital. Upon the advice of Pierce and Dr. Gershowitz, the family took Olivia to visit another gastroenterologist who took over her care. The family then sought out a pediatric psychologist who was also a Christian to help them determine whether Olivia’s symptoms were a result of some kind of mental trauma.

With this new team in place, Pierce helped the family disconnect themselves from the hospital by letting the hospital know they were seeking a second opinion about Olivia’s care. The family even told the hospital that their pediatrician, the new gastroenterologist, and the new pediatric psychologist were handling Olivia’s care.

However, the hospital would have no one questioning their judgment: “You either have your daughter here in the morning or we are reporting you to CPS!” Thankfully, Pierce was able to guide the Huffmans through this threat and, by the grace of God, kept the hospital from making such a vicious, self-serving report.

Later, upon the advice of their physicians, the Huffmans did take Olivia back to another hospital, where she was able to get the care she needed by doctors and staff who refreshingly believed in including parents in the care of their children.

Today, Olivia is back home. She is eating and walking well, as if nothing had ever happened. We are grateful that God brought her healing and spared her from being taken away from her family for seven hours a day, five days a week for what would have been a truly traumatic experience.

Mr. Huffman shares his thoughts on the experience:

“When a parent has a sick child, nothing is more important than getting the best possible care. I assumed we and the hospital had the same goal for our daughter, but when it became apparent that they considered us an impediment, Heritage Defense and Bradley Pierce were a steady guide through a stressful time. I strongly recommend any Christian family raising children with biblical precepts to have Heritage Defense as a resource.”

If you are a member of Heritage Defense, we hope it is an encouragement for you to know that your membership is going to help families like these. If your family is ever falsely accused of child abuse or neglect, we are ready to defend you and your rights.

If you are not yet a member, please join today to have 24/7 access to experienced attorneys ready to defend your family.