Most of us have been here. 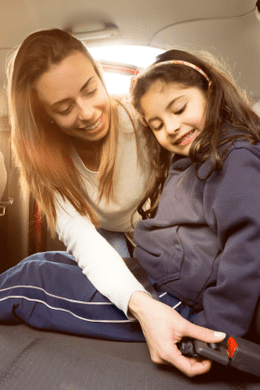 You are out running errands and have been getting your children in and out of the car all day. Now, all you need to do is make a quick stop at the post office.

You think to yourself, “This will not take long.”

You pull in the parking lot and turn your head to look at the children. They are asleep.

You know you should probably bring them in with you, but you still question yourself.

“What am I supposed to do, wake them up for something that won’t even take five minutes and I can see them through the window the whole time? They’re not little anymore. And the weather is nice – not too hot or cold.”

“Can’t I leave them there for just a minute or two?”

Many of us have asked ourselves this question. In situations that appear safe there is no easy answer and this article cannot tell you what you should do in every situation.

What we can do is inform you what the laws in your state say you may not do and provide some guidance which we hope is helpful.

As you review this interactive map, please note that it does not describe what you should do or even what you may do. It only describes what the laws of your state say you may not do.

As you can see, the laws on this subject vary widely, but here are a couple of general takeaways:

One exception to both of these is the State of Washington, which requires that even someone fifteen years old should not be left unattended in a vehicle in a public place if the motor is running.

Also, keep in mind that cities and other municipalities may have even more restrictive laws.

What If My State Does Not Have a Law on This Issue?

Though many states do have specific laws that regulate the who, when, and how you can leave your children in the car, most do not, as illustrated by the numerous gray-colored states on the map.

In the states without such laws, does this mean that a parent will never be arrested by law enforcement or investigated by Child Protective Services (CPS) for leaving a child in a car? No, it is not that simple. Just because there is not a specific state law does not mean you can assume that leaving your child alone in the car is legal.

First, even in states that do not have a statewide law on the subject, many cities or other municipalities do.

Second, if there is no specific state or local law about leaving a child in a vehicle, it is likely that a general child neglect, failure to supervise, or child endangerment law could apply.

Finally, even if leaving your child alone in a vehicle is not a crime, it may still be considered neglect under child welfare laws which often have very vague and subjective definitions.

If the situation were safe and leaving your child alone in a vehicle were not a crime or considered neglect under any definition in your area, still bear in mind that anyone who sees your child alone in the car could still report it and spark a CPS investigation.

While you may assert that you have the right to leave your children in the car when the situation is safe, others may still feel legally obligated to report you. Even people who are not mandatory reporters may freely report you to CPS. This happens regularly. We have represented several member families in investigations sparked by reports like these. While all of these investigations were closed successfully, they were still very trying for the families who went through them.

While a hard-and-fast rule to follow would be ideal, varied and vague laws and differences in their enforcement make that elusive. Instead, parents must make a judgment call in each situation based on different facts, circumstances, and the maturity of their children. As you make those decisions for your own family, please carefully weigh the benefits of saving time and avoiding inconvenience with all the potential risks.