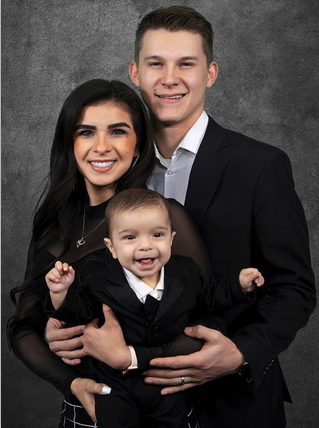 When their 10 month old son, Cyrus, became ill and continued vomiting, Levi and Marissa Anderson took him to St. Luke’s Pediatric Center in Boise, Idado. After one week in the hospital undergoing numerous exams and tests, Cyrus was released with a clean bill of health.

Marissa and Levi continued to take Cyrus to the local pediatrician for regular check-ups and weigh-ins. On one morning of a scheduled check-up, Marissa woke up feeling queasy. So she called the doctor’s office to let them know she couldn’t come in that day. In response, the doctor’s office apparently reported the Andersons to Idaho child protective services (CPS), accusing them of child endangerment.

That same evening, two police officers showed up at the Andersons’ house, but they were not home. So the officers put out a BOLO “be on the lookout” alert for the family’s car. Later, the Andersons were on their way home from a friend’s house when they were pulled over at a gas station by police. Officers handcuffed Levi and Marissa’s sister who was with them. Then even after promising Marissa multiple times that she would not be separated from Cyrus, they forcibly removed Cyrus from her arms, separated them, and placed her under arrest.

After a week of fighting for his return by their family and attorneys, and with considerable community support, Cyrus was placed back in the possession of Levi and Marissa. Yet Cyrus is still in the legal custody of the state and the legal battle is ongoing.

Heritage Defense Foundation is significantly involved with defending the parental rights of the Andersons as we fight to see Cyrus is fully returned to their custody and CPS closes their case.

If you would like to help support our fight to protect Baby Cyrus and defend the parental rights of Levi and Marissa Anderson and other families like them, please donate today.

If you are a member of Heritage Defense, we hope it is an encouragement for you to know that your membership is going to help families like the Andersons. While we cannot guarantee outcomes, if your family is ever falsely accused of child abuse or neglect, we are ready to fight to defend you and your rights.

If you are not yet a member, please join today to have 24/7 access to experienced attorneys ready to defend your family.